We are often told that we need economic growth to address social problems such as unemployment and poverty and to improve everybody’s welfare. However, if one of your sleeves is tight on you, this does not necessarily mean that you need a bigger shirt: perhaps what you need is to reshape your shirt. Indeed, this will be your sole option if you have little thread left.

Economic growth is not a realistic answer to social problems in a world with vanishing natural resources, ecological degradation and climate change. The sensible answer is a deep transformation of the economy to make it more egalitarian and better suited to people’s aspiration to satisfy their basic needs and to live a meaningful and fulfilling life, while we get rid of many economic activities that we do not really need, and contract the economy to sustainable levels, carefully and in a truly democratic way. Currently, this idea is best known with the name of degrowth (see this web or this one), and their supporters pursue it at all levels, including individual consumption choices, grassroots self-organization to experience alternative forms of collective functioning, and political action.

However, very few people in the degrowth movement are aware that we are essentially repeating a cycle of mobilization that had already taken place from the late 1970s to the early 1990s (Piulats 1984 is a good sample, in Spanish). In that period, the ideas and practices that we currently call degrowth were labelled just as green, without knowing that the environmental movement would later become dominated by other different shades of green. The movement was especially strong in West Germany, becoming a reference all over the world when its political arm, Die Grünen (the German Greens) irrupted into the Federal Parliament in 1983.

Unfortunately, Die Grünen became split in two main factions. The fundamentalist or fundi, which we would currently call degrowther, would soon have to share the party with the self-called realists or realos, closer to what we currently call green capitalism. Fundis went under pressure after an electoral defeat in 1990 (when the Greens did not share the general enthusiasm for a quick reunification of Germany, warning of the many problems that this would cause to East Germans, and focused their campaign on the then virtually unknown issue of climate change; paraphrasing the German Railways’ slogan Everyone is talking about the weather. We don’t, their slogan was Everyone is talking about Germany; we’re talking about the weat 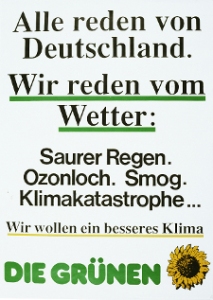 her!; e.g., Jungjohann 2013). In a party congress in 1991, the fundis were defeated and left the party (see different views of this congress here and here). The end of the German Greens of the 1980s was rounded off with the death in 1992 of its most emblematic member, the fundi Petra Kelly.

After these events, the ideas, experiences and illusions of the early Grünen were forgotten almost completely. However, their spirit has never ceased to manifest itself in lots of grassroots initiatives. And, behind this veil of amnesia, there is a hidden treasure: the political programmes of the German Greens of that times. As described in a paper that Jorge Riechmann published in Ecología Política in 1994 (if you understand Spanish, this review is a must read), there was a conscious process of programmatic elaboration. It was carried out by the assemblies and representatives of the party all over West Germany, the many social movements where they had their roots, and hundreds of experts hired with the funds obtained from the presence of the party in the institutions. They envisioned, with much detail, how Die Grünen could foster a transition toward a socially fair degrowth.

Even though Die Grünen had already moderated some of their positions before the upheaval of the early 1990s (Blühdorn 2009), the rich programmatic document on international economic policy elaborated between 1988 and 1990 still declares that For us it is no longer international politics in the national interest but national politics in the international interest (p. 7) and that we should not hide the fact that our foreign economic guidelines could bring about a noticeable reduction in our current standard of living (p. 93). Few current radical parties would dare to go so far.

I was appalled by the amnesia surrounding the early Grünen, which I noticed in many different ways, not least by failing to find some key programmatic documents with search engines. Taking advantage of a trip to Berlin to give a talk, I visited the historical archive of Die Grünen (run by the Heinrich Böll Foundation) and I photocopied some of these documents. I put them together with some other documents in this small repository.

By studying the early programmes of Die Grünen, the degrowth movement can save much effort and leap forward in the detail and quality of its political proposals. Like the protagonist of Groundhog Day, we can also learn from that past to avoid a repetition of the same story.

This is just the beginning. I hope that this (or some other) repository will be enriched with more programmatic documents and with translations. Currently, these are the documents available for download: